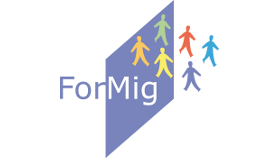 After the collapse of the derg-regime in 1991, Eritrea and Ethiopia have again become countries of emigration ruled by authoritarian post guerrilla-governments. Young educated urbanites set off into migration – ready to put their lives and health at stake in a risky gamble for a new existence in Europe. Europe is imagined as the other of their home countries. They seek economic prosperity but also democratic participation and the rule of law.

Passing through different progressive stages and stations of migration, they become learners who have to cope with unfamiliar and precarious environments while already taking steps towards the next stage. In this environment of uncertainty and precariousness predetermined life trajectories and routines become unreliable. Due to constant restrictions and exclusions this learning process includes growing disillusionment. Rumours and information from participation in migrants’ fluid transnational communication milieus and own experiences along their migratory trajectory feed and constantly transform their imaginations and their perceptions.

This is to say that migrant’s knowledge evolves along the passage to Europe. Methodologically speaking migrants’ knowledge, their perceptions of the world and their habitual ways of dealing with the world have to be studied in the environment of their evolution, namely in the stages of migration.

These dynamic worlds of imagination and knowledge will be studied among and in cooperation with younger migrants in relevant stages and stations of migration (among others Khartoum, Istanbul, Milan, Bavaria).