Researchers hope for new insights into the pathogenesis as well as new treatment approaches using patient specific disease models based on the "induced pluripotent stem cells" technology (iPS).
Reprogramming of mature cells of the body into so called “induced pluripotent stem cells“ represents one of the most innovative biomedical developments of recent years (Nobel Prize in Medicine 2012 for Shinya Yamanaka and John B Gurdon). Using this technology, connective tissue cells of the patients can be re-programmed to the stage of pluripotency. As a result, patient-specific stem cells are generated and can be further differentiated into organ-specific cells. These cells may serve as a cellular model for the analysis of specific or individual disease causes, thus enabling the development of new treatment strategies. 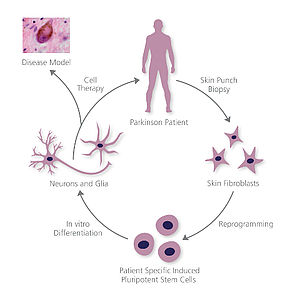 ForIPS aims to establish the iPS technology and to use the iPS cell derived neural cells as cellular models to analyze the pathogenesis of PD. Scientists at ForIPS re-program skin cells from PD patients and healthy control subjects, and differentiate those patient specific iPS cells into neural cells.  As these neural cells constitute very specific cellular models researchers hope to decipher the underlying pathogenic mechanisms of PD.

In addition, the research groups at ForIPS will establish a biobank for human iPS cells and will implement the iPS technology at all associated Bavarian universities. With this, an efficient platform for advanced investigation of other brain diseases and disorders of other organs will be created.

ForIPS focusses on sporadic PD, with over 85 percent the most common form of all Parkinson syndromes. After Alzheimer's disease, PD is the second most common neurodegenerative disease worldwide, and causes in the brains of affected patients a profound loss of neurons that control motor functions, causing symptoms like an overall slowing of movements (bradykinesia), increased muscle tone (rigor), and tremor. Beside motor functions, also non-motor functions such as hyposmia, sleep disorders and depression are frequently observed prior to the onset of motor deficits. Current therapeutic approaches are hardly able to halt or even reverse the progression of the disease. In addition, the etiology of sporadic PD is multifactorial, and moreover, the underlying molecular and cellular mechanisms of each affected individual remain largely unknown. The monogenic forms of PD and the analysis of PD models up to date indicate that alterations of important intracellular functions play a role in the pathogenesis of PD. In order to define new targets for therapeutic strategies it is essential to use PD patient derived cells to decipher individual disease mechanisms.